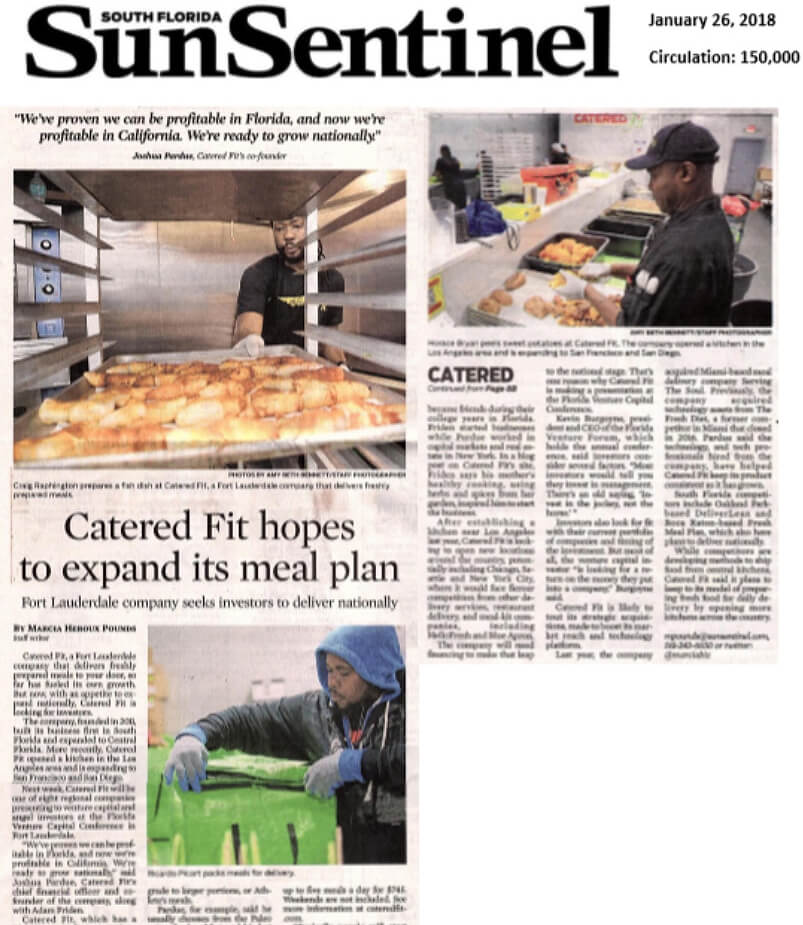 Catered Fit, a Fort Lauderdale company that delivers freshly prepared meals to your door, so far has fueled its own growth. But now, with an appetite to expand nationally, Catered Fit is looking for investors.

The company, founded in 2011, built its business first in South Florida and expanded to Central Florida. More recently, Catered Fit opened a kitchen in the Los Angeles area and is expanding to San Francisco and San Diego.

Next week, Catered Fit will be one of eight regional companies presenting to venture capital and angel investors at the Florida Venture Capital Conference in Fort Lauderdale.

“We’ve proven we can be profitable in Florida, and now we’re profitable in California. We’re ready to grow nationally,” said Joshua Pardue, Catered Fit’s chief financial officer and co-founder of the company along with Adam Friden.

Catered Fit, which has a 32,000-square-foot operations center and commercial kitchen near State Road 7 and Commercial Boulevard, employs 135 people and produces 5,000 meals a day for delivery. The majority of those meals go to customers in South Florida, Pardue said.

“You have different menus and, with our software, you can choose the exact meal you want, and can mix and match meals,” Pardue said.

The choice of meals includes: Classic, for those who want to maintain a healthy weight; Paleo, a diet similar to what early humans ate that is also diabetic-friendly and gluten-free; Meatless; or Combo plans for a variety.

Meals come in a range of calories for women and men, but customers also can choose to upgrade to larger portions, or Athlete’s meals.

Pardue, for example, said he usually chooses from the Paleo menu for breakfast and his last meal of the day, then one Meatless meal and one Athlete’s meal during the day.

Kenny Kessler, a 34-year-old finance manager, has been a Catered Fit customer in Fort Lauderdale and in Irvine, Calif., where he recently moved. “I work a lot and I don’t have time to cook, so I was eating out a lot,” he said.

Kessler said he likes the quality of Catered Fit’s meals, and that he can choose to eliminate foods, such as grapefruit and eggplant, that he doesn’t like. “They hit on all cylinders,” he said.

“Typically people will start out with a week, and then they realize they can save money with the 20-day plan,” Pardue said. “Our goal is to maintain the relationship over their lifetime.”

One reason the company is poised for growth is that it has made money almost from the beginning and has reinvested its profits in the business, said Robert White, a certified public accountant who worked with Catered Fit in its early years. Friden and Pardue “have done an outstanding job in the growth of the company,” he said.

Friden, and Pardue, both 35, became friends while attending the University of Tampa. Friden started businesses while Pardue worked in capital markets and real estate in New York. In a blog post on Catered Fit’s site, Friden says his mother’s healthy cooking, using herbs and spices from her garden, inspired him to start the business.

After establishing a kitchen near Los Angeles last year, Catered Fit is looking to open new locations around the country, potentially including Chicago, Seattle and New York City, where it would face fiercer competition from other delivery services, restaurant delivery, and meal-kit companies including HelloFresh and Blue Apron.

The company will need financing to make that leap to the national stage. That’s one reason why Catered Fit is making a presentation at the Florida Venture Capital Conference.

Kevin Burgoyne, president and CEO of the Florida Venture Forum, which holds the annual conference, said investors consider several factors. “Most investors would tell you they invest in management. There’s an old saying, ‘Invest in the jockey, not the horse.’ ”

Investors also look for fit with their current portfolio of companies and timing of the investment. But most of all, the venture capital investor “is looking for a return on the money they put into a company,” Burgoyne said.

Catered Fit is likely to tout its strategic acquisitions, made to boost its market reach and technology platform.

While competitors are developing methods to ship food from central kitchens, Catered Fit said it plans to keep to its model of preparing fresh food for daily delivery by opening more kitchens across the country.

“We would continue with that business model,” Pardue said.